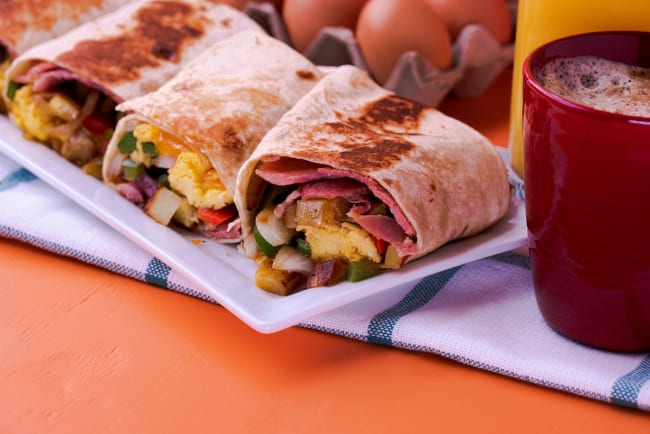 Wash and peel the Yukon potato, then chop it into small, even-sized cubes. Heat a pan to medium heat and fry cubes in a little bit of oil until cubes are browned and soft. Transfer cooked potato cubes into a small bowl.

Keeping the pan at medium heat, add in the peppers and onion, cooking them until slightly soft, then transfer the cooked veggies into a small bowl.

Keeping the pan at medium heat, grill the country ham slices slightly for thirty seconds on each side. Transfer the meat to a small bowl.

Crack all four of the eggs, salt, and pepper in a mixing bowl and scramble thoroughly.

Clean the pan and heat to a medium heat, then pour in the eggs and scramble them in the pan until cooked. Transfer into a small bowl.

Lay out a tortilla on a flat surface. Lay half of the pepper jack cheese in the middle of the tortilla from one side to the opposite side. Then lay down half of the cooked ingredients in this order: country ham slices, cooked vegetables, potatoes, and scrambled eggs. Fold in the sides perpendicular to the ingredients then roll the tortilla into a tight wrap, leaving no openings. Do the same with the other tortilla and the rest of the ingredients.

Microwave the tortillas for 5 seconds before wrapping them to make them more flexible and easier to wrap.

Panini presses work well with grilling the wraps. If you have one, use it!

Use our Store Locator to find Hobe’s Country Ham products near you!

For a winning dinnertime centerpiece or gift idea, buy ham from us at Hobe’s Country Ham, and you’ll see why our family tradition will quickly become one of yours, too!